Spanish wines (Spanish: vinos españoles) are wines produced in Spain. Located on the Iberian Peninsula, Spain has over 1.2 million hectares planted, making it the most widely planted wine-producing nation but it is the third largest producer of wine in the world, the largest being Italy and France, followed by the United States. This is due, in part, to the very low yields and wide spacing of the old vines planted on the dry, infertile soil found in some of the Spanish wine regions. Traditional vineyards are common sights in the countryside.

The abundance of native grape varieties fostered an early start to viticulture with evidence of grape pips dating back to the Tertiary period. Archaeologists believe that these grapes were first cultivated sometime between 4000 and 3000 BC, long before the wine-growing culture of the Phoenicians founded the trading post of Cádiz around 1100 BC. Following the Phoenicians, the Carthaginians introduced new advances to the region-including the teachings of the early viticulturist Mago. Carthage would wage a series of wars with the emerging Roman Republic that would lead to the Roman conquest of the Spanish mainland, known as Hispania.

Under Roman rule, Spanish wine was widely exported and traded throughout the Roman empire. The two largest wine producing regions at the time were Terraconensis (modern-day Tarragona) in the north and Baetica (modern-day Andalucia) in the south.

Following the completion of the Spanish Reconquista in 1492, Christopher Columbus discovered the New World under the sponsorship of the Spanish crown. This opened up a new export market as well as new opportunity for wine production. Spanish missionaries and conquistadors brought European grape vines with them as they colonized the new lands.

Today Spain can be traditionally divided into 12 main wine regions. Castilla – La Mancha is the largest wine producing region, producing 13 million hectolitres, a third of Spanish wine output. Catalonia is the second largest producer, producing 5.5 million hectolitres (14% of total), and La Rioja is the third largest, producing almost 5 million hectolitres (13% of total). Major Spanish wine regions include the Rioja and Ribera del Duero, which are known for their Tempranillo production; Jumilla, known for its Monastrell production; Jerez de la Frontera, the home of the fortified wine Sherry; Rías Baixas in the northwest region of Galicia that is known for its white wines made from Albariño and Catalonia which includes the Cava and still wine producing regions of the Penedès as well the Priorat region. 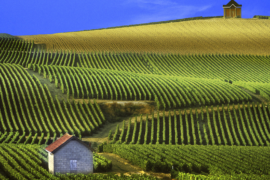